CLOSED FOR THE WINTER! 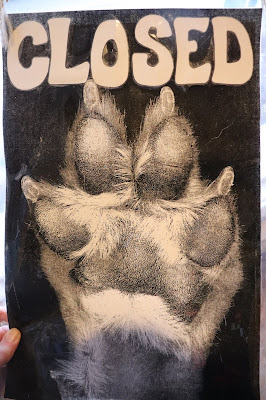 Yes, Dog Ears Books is closed for the winter, so that your aging bookseller in Northport can avail herself of "seasonal retirement," but we will be back in the spring. Meanwhile, we urge friends in Leelanau to buy and order books from Leelanau Books in Leland, Bay Books in Suttons Bay, and the Cottage Bookshop in Glen Arbor. And wherever you travel during the winter, please shop independent bookstores! Your purchases keep alive these places you love to visit!

And now, we wish all of our friends and customers and visitors and browsers happy holidays and a safe and healthy winter! 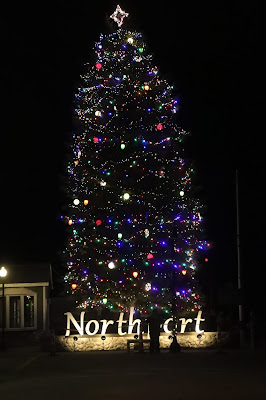 And the late November News Is ... 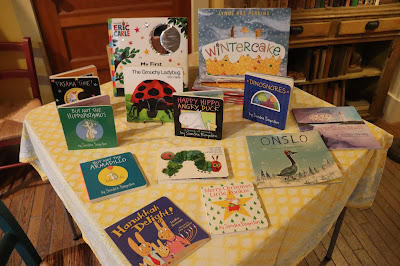 Little time remains in the 2019 Dog Ears Books season! Saturday, November 30, will be our last day of business until spring. With that in mind, you'll want to get yourselves through the bookstore door soon, because even if you don't exchange gifts with grownup friends and family, and even if you think you don't deserve much yourself but a lump of coal, surely you'll want to treat the little ones to colorful, page-turning joys of the season. But hey! As for that lump of coal? You do deserve something more than that, and we have treasures for big people, too!

I don't call the day after Thanksgiving "Black Friday" (yuck! hate that phrase!), but we will be open all day on Friday, and if you want to avoid crowds, that may be the day for you to come to Northport, because on Saturday, November 30 (remember: the last day of the bookstore season!), the entire village will be in festival mode, including an arts and crafts sale from 10 a.m. to 4 p.m., Santa at the village hall from 4 to 5:30, and the lighting of the village tree at 6 p.m. Pending weather and confirmation, there may also be -- fingers crossed! -- horse-drawn carriage rides, 3-7 p.m., and strolling carolers in Victorian costume 4-5:30 p.m.

So you see, maintaining a Scrooge- or Grinch-like attitude is going to be mighty difficult. I myself could not have fought against holiday joy this morning even if I'd wanted to. My heartfelt pleasure came from watching a little one-year-old booklover almost take her first independent steps in my bookstore!

I've read about marriage proposals and weddings in bookstores, but wouldn't a baby's first steps be the most special event possible? Lure that child with a colorful board book or story book, I say! It will make the whole family happy!
Posted by P. J. Grath at 1:33 PM No comments: 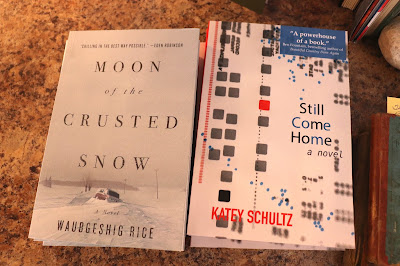 I have reviewed these two fine, important, and compellingly written novels on Books in Northport, Moon of the Crusted Snow here, Still Come Home here, so please take a look at those posts if you haven't already.

Whether you look to fiction for the pleasure of beautiful written language, engaging and memorable characters, armchair travel, a greater knowledge of the world, or deeper understanding of other cultures, both these books fit all those requirements. And both, while new, are available in paper, making them budget- and space-friendly. Easy to mail, too. Think of that as December holidays come closer.

Dog Ears will be open through Saturday, Nov. 30, and then closed for the winter. 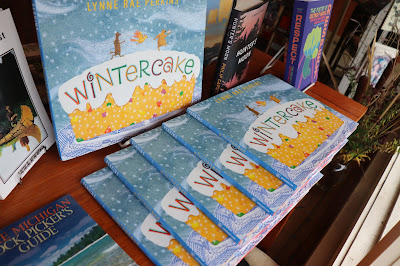 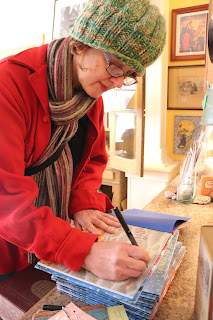 Actually, Lynne Rae Perkins made a special trip up to Northport on Saturday, November 2, to sign a few copies of her new book for me, but she will come back for an official signing on Saturday, Nov. 16. Our official starting time for that event is 2 p.m., and we’ll see how long we can keep her here. I guarantee it will be until 3 p.m., at least.

Since she was here today (as I post this), I do have a few signed copies on hand already, for customers who can’t wait two weeks to get their new Perkins book. While here, Lynne also signed copies of her other books I had in stock, and I’ll restock those for the official mid-November signing.

Lynne Rae Perkins is such a charming, delightful guest that she brightens the bookstore any day she walks in the door, so please join us if you can on November 16. You’ll have a good time, I promise! And we will probably have cookies, too. 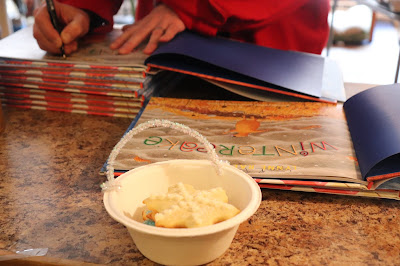 Always a Treat -- Cake? In a New Book from Lynne Rae Perkins! 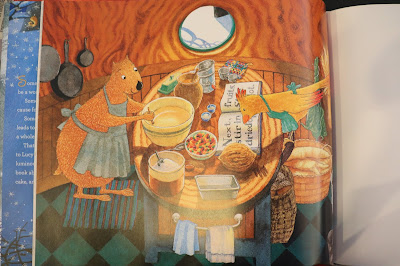 It’s a lot of work to bake a cake from scratch, but even more effort is involved in making amends for having misjudged someone. When Lucy realizes she has jumped to a wrong conclusion, though, she overcomes her natural feelings of foolishness by creating a beautiful gift. And, as generally happens in a story by Newbery winner Lynne Rae Perkins, adventure takes shape along the way. 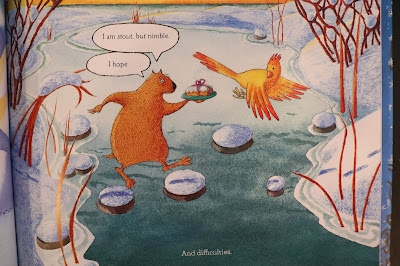 A perfect book to go under the Christmas tree — or to be read by the whole family after Thanksgiving dinner.

Wintercake
by Lynne Rae Perkins
Hardcover with dust jacket
$17.99
Posted by P. J. Grath at 9:37 AM No comments:

Some Change Is for the Better

This change has been begging to be made for a while, and yesterday a batch of consignment items brought it on at last. The automotive section -- motorcycles and cars -- has now been moved over one aisle. It's below planes and boats, where it belongs!

Another advantage to the new arrangement is that books on home improvement and decoration, woodworking, furniture, as well as sewing, knitting, quilt books, and books on antiques now have room to breathe. I think this is going to work out well.

Michigan and the Civil War 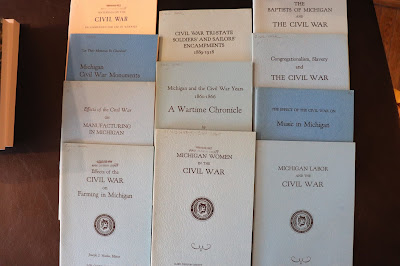 Between the years 1961 and 1966 the Michigan Civil War Centennial Observance Commission issued a number of reports on Michigan’s involvement, a century earlier, in the Civil War and the effects of that war on Michigan. Report copies listed below are stapled pamphlets de-acquisitioned from the holdings of the Mark & Helen Osterlin Library at Northwestern Michigan College in Traverse City, Michigan. Other than library stamps on top edges, light pencil on a couple of front covers, and Commission stamps on some of the lower front covers, these pamphlets are in nearly pristine condition. Most, in fact, appear unread. Crisp and clean!

I am offering a reduced price of $150 for all eleven items purchased together as a collection. Otherwise, prices below (totaling $195) are for undiscounted individual items.

1. Materials on the Civil War Recommended for Schools - $10

4. Effects of the Civil War on Manufacturing in Michigan - $10

9. Congregationalism, Slavery and the Civil War - $20