Birdman and Birds for the Birders 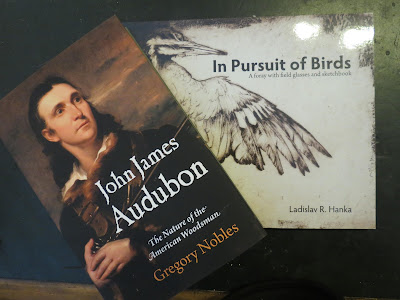 John James Audubon: The Nature of the American Woodsman, by Gregory Nobles, will be featured at a Dog Ears Books author event on Thursday evening, August 3. The book is as much history as it is biography. See my review of this fascinating study of America’s foremost bird artist, and for the author’s presentation on C-SPAN, click here.

In Pursuit of Birds: A foray with field glasses and sketchbook, by Kalamazoo artist Ladislav R. Hanka, is more birds than birdman. As Hanka puts it, the book is “drawings and etchings of birds with some stories about birding in exotic places.” Bird art in its highest form!

Both Mother’s Day (May 14) and Father’s Day (June 18) approach as we move through spring, and if you have a birding parent or grandparent, either of these books would make a thoughtful gift. 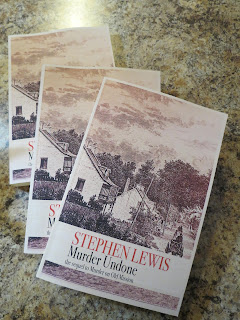 I’ve often said that someone could open a bookstore stocking only these two categories of book, history for the nonfiction readers and mystery for the fiction readers, and do a pretty good business. Of course, that would leave out poetry, classic literature, cookbooks, and so many other genres and subjects that I haven’t restricted myself that way. I only mention it this morning to introduce a new book by Traverse City’s Stephen Lewis.

Here’s what Aaron Stander has to say about Steve’s new book:

Stephen Lewis guides the reader through a richly woven tapestry of time, place, and character. This historical narrative set in the early years of the 20th century transports the reader from northwest lower Michigan through the halls of power in Lansing, the prison yard in Jackson, LaSalle Street law offices, lumber camps, and Michigan’s copper country—then torn by labor unrest. It is a superb sequel to Lewis’s earlier novel, Murder on Old Mission. 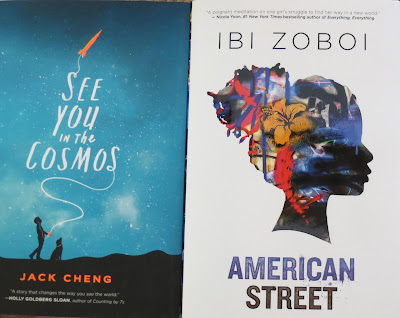 See You in the Cosmos, by Jack Cheng, is the author’s first YA literary venture. The novel’s protagonist is 11-year-old Alex, obsessed with space exploration. He has even named his dog Carl Sagan. Alex’s father has died, his mother has problems, and his older brother isn’t around much, so it’s Carl Sagan (the dog) who is Alex’s chosen companion on a road trip with a constantly changing destination that brings many surprises into the boy’s life.

I still have more to pack but I needed a break, so I came up to the roof of my house. I love lying down on the hood of a car like Dr. Arroway in the movie Contact but my mom doesn’t drive anymore, so I just come up on our ladder to the roof. I usually come up here at night so that way I’m closer to the stars, even though it’s only one story closer.

The protagonist of American Street, by Ibi Zoboi, is a girl who has made a different kind of voyage. When Fabiola Toussaint, born in the United States, leaves familiar Port-au-Prince with her mother, she thought they would reach a new home together, but in the airport in New York her mother is detained, to be sent back to Haiti, and the frightened daughter must fly on to Detroit alone to meet her cousins in what feels like strange new land.

Darkness seeps into every crack and corner of this Detroit. Even with a few lampposts dotting the streets, I can’t see the breadth and depth of this city that is my birthplace, that is now my home. I squint to see if the big mansions I’ve seen on American TV will glow of sparkle in the dark. I hope to catch a glimpse of the very tops of the tall buildings, but the car is moving too fast—with its fancy seats, too-loud music, and the scent of shiny new things.

Ibi Zoboi’s American Street, then, is set in Detroit, while Jack Cheng, author of See You in the Cosmos, grew up in Michigan. I’ve given you a taste from the beginning of each story, with everything yet to come for Alex and Fabiola, in hopes you will want to journey along with them.

Dog Ears Books will officially re-open for the 2021 season on Friday, May 21. We are happy to be back and look forward to seeing you. It feels as if it is going to be a wonderful summer!