It Doesn't Have to be Fancy to be Exciting 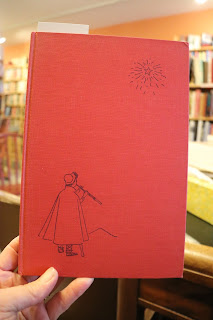 This is not a fancy book at all. It doesn’t even have a dust jacket. Really, I plucked this particular hardcover story-version of Gian-Carlo Menotti’s Amahl and the Night Visitors (“This narrative adaptation by Frances Frost preserves the exact dialogue of the opera”) out of a box with interest only because the illustrator, Roger Duvoisin, has been a favorite of mine since my son was little and we discovered and enjoyed his Petunia books together. Illustrations in Amahl are not as loosey-goosey as other work by Duvoisin, but the bright colors are definitely his. Anyway, a nice little Christmas book, right? 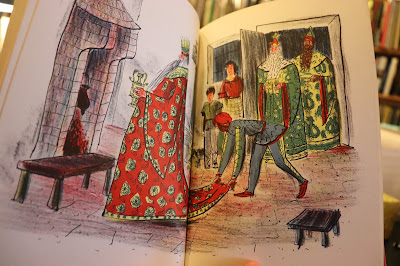 Musing over what would be a reasonable price, I turned the first leaves almost idly. Publication date was 1952. It was the half-title page, though, that stopped me in my tracks. What were all those names? Each in a different handwriting? None was Menotti’s signature or Frost’s or Duvoisin’s…. 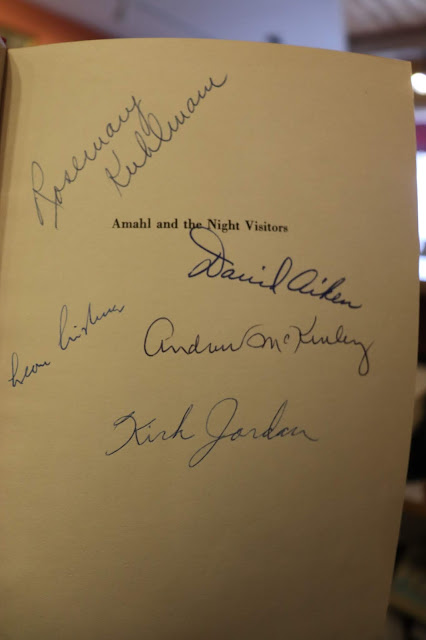 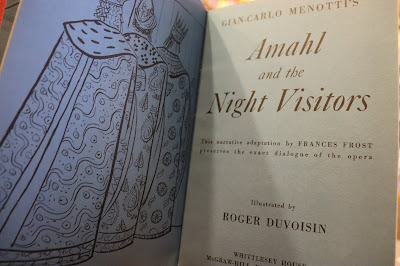 I’m not an opera aficionado. I had to look up the names. David Aiken: operatic baritone. Andrew McKinley: operatic tenor. Rosemary Kuhlman: mezzo-soprano. All three were in the original 1951 cast of Menotti’s opera, which was also (written in English) the first opera written for television, commissioned by NBC and broadcast as the first production of the television’s Hallmark Hall of Fame. First Hallmark, first television opera, original cast members — well, now I am very excited! In fact, I can hardly believe what I’m holding in my hands! Since the publication date was 1952, maybe the other names were in the cast of that year’s production? Thrills like this are part of the adventure of dealing in used books. I haven’t decided on an asking price yet. This is a one-of-a-kind item, not something with a lot of “comparables,” but I know the right buyer would be over the moon to have it. What a Christmas present it would make, eh?
Posted by P. J. Grath at 8:30 AM No comments:

Whether your fresh vegetables come from the farm market to your kitchen or from your own backyard garden, it never hurts to find new, inspired ways to prepare them for the table. Pascale Beale's third Market Table book offers more than 100 plant-based dishes, with mouth-watering full-color illustrations. 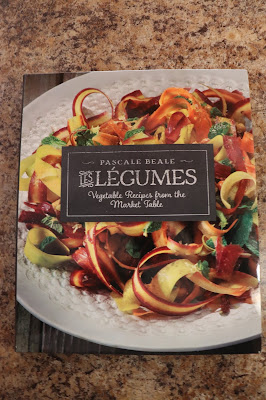 Dog Ears Books will officially re-open for the 2021 season on Friday, May 21. We are happy to be back and look forward to seeing you. It feels as if it is going to be a wonderful summer!